When we bought this house I was pretty confident I could make it livable, but the one and only full bathroom gave me, well…nightmares. It was a 50s monstrosity that looked like it belonged in a horror movie. It was so bad, few people would actually enter it, they just looked on in shock from the hallway. Aside from being a general disaster area, the bathroom had a bad layout and no room for both a shower unit and a freestanding tub. 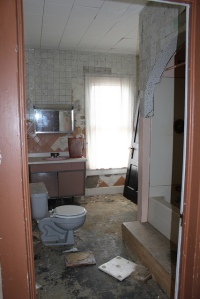 After we gutted the bathroom, along with the rest of the house, we knocked out a closet to expand the bathroom and make room for two sinks, along with a shower and tub. I found a vintage looking tile for the floor, and in doing so discovered the joy ride that is black grout. I thought about doing a vanity with two sinks, but I really wanted the bathroom to look like it could have when the house was nice. Plus, I love the look of furniture in an old bathroom, instead of a modern vanity. Luckily, at the Wood Shack I found a small dresser that fit perfectly. The shelf above the tub and the wood with the hooks for the towels are also from the Wood Shack.

I showed my husband the “after” pictures and said, “Now, if you saw these pictures, wouldn’t you want to live in this house?” “Sure,” he said, “until you told me it was the ONLY finished room in the house.” Sigh….. 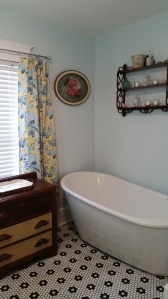 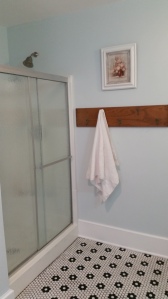